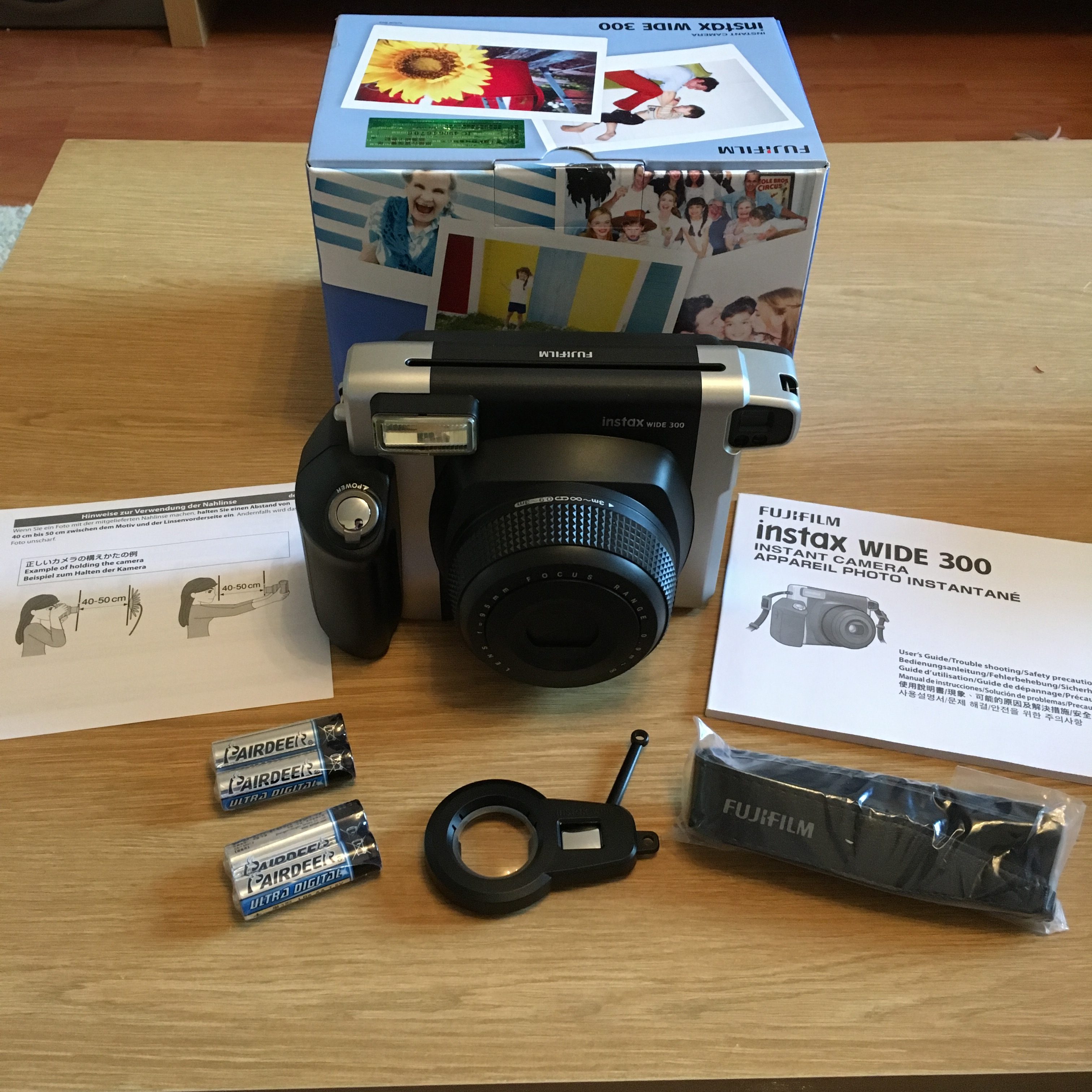 Back in September this year I got married and Sarah and I decided to make our own photobooth for the wedding. We had a few ideas to keep the price down however the greatest expense would be the camera. We contemplated getting a camera with a printer attachment and doing the whote take a photo and share the hashtag option however in the end we settled for something a little more classic opting for an instant camera.

I was given responsibility for sourcing the camera and in the end settled for the Fujifilm Instax 300 Wide.

Having considered the alternative which was the Fujifilm mini, I preferred the larger, wide option as it would better fill the pages of our wedding guestbook – the mini only offered credit card sized images which for me were just a little too small.

With the decision on the camera sorted I scouted the internet for the best price and ended up purchasing the camera and 5 packs of 20 films from http://www.eglobalcentral.co.uk/ for £150 which at the time was at least £20 cheaper than the nearest competitor – it’s currently selling for £117 which is a steal!

I must say, I was nervous about the purchase as it was coming from China however the camera and contents all arrived within 5 days of purchase exactly as described!

So what’s in the box?

Opening the box presented a number of things including the camera, carrying strap, batteries, close up attachment and the instructions (in English).

The camera itself is pretty smart and offers simple, point and shoot functionality. The film loads into the rear of the camera and taking shots ejects them film from the slot in the top of the camera. The large viewfinder on the left of the camera offers a good view of your subjects and the flash is more than sufficient to light up the area.

On the back of the camera there is straightforward functionality with a L and D button. The camera automatically adjusts the light coming into the lens however if the subject is too light or too dark in your photos you can press these buttons to adjust the output.

The other button offered is to change the flash from auto to off.

The final feature that the camera offers is the adjustable lens. A quick twist of this adjusts the camera’s focal distance and with the close up attachment clipped on, offers the ability to take improved portrait photos.

One thing to note with the camera is that it takes cartridges of 10 so although the boxes of film come in 20’s it’s actually 2 packs of 10. Therefore be prepared if you’re using the instant camera for an event to change over the film fairly frequently (we nominated the bridesmaids to keep an eye on things at the photobooth!)

To determine photo quality I needed a couple of test subjects and around my house found 2 willing volunteers!

This was taken with everything on the camera set to standard so as you can see the images came out a little dark. If however I pressed the L button on the back and re-shot the photos they would have come out a lot lighter.

The camera’s photo quality is exactly as you would expect from an instant camera. It’s by no means a digital photograph but that’s not why you buy one of these. The camera offers a simple, classic image which can bring about a vintage look and feel to whatever use you are thinking to use it for.

Once the photos are taken the camera expels the film within about 4-10 seconds and then the film develops fully in about 3-5 minutes depending on conditions.

Overall I was pretty happy with the result and our guestbook images look great!

The final thing to note is that as it is an instant camera and uses wide film, the camera is quite bulky. It’s not particularly heavy due to the strap that it supplied in the box however if you’re not used to having a DSLR or if you haven’t had an instant camera before, this piece of kit may annoy you! Here’s how large the camera is in comparison to my head…

Having no prior experience of instant cameras I bought the Fujifilm Instax Wide 300 having read a bunch of reviews online about what to go for. In the end I got the best price I could find at the time and was really happy with my experience with eGlobal Central.

The camera did a fantastic job at the wedding and our guests loved the vintage nature of it all as something different to the typical photobooths and props you see at most weddings these days.

The film was dead simple to change over and the quality of the prints did the job to the level of quality we were looking for.