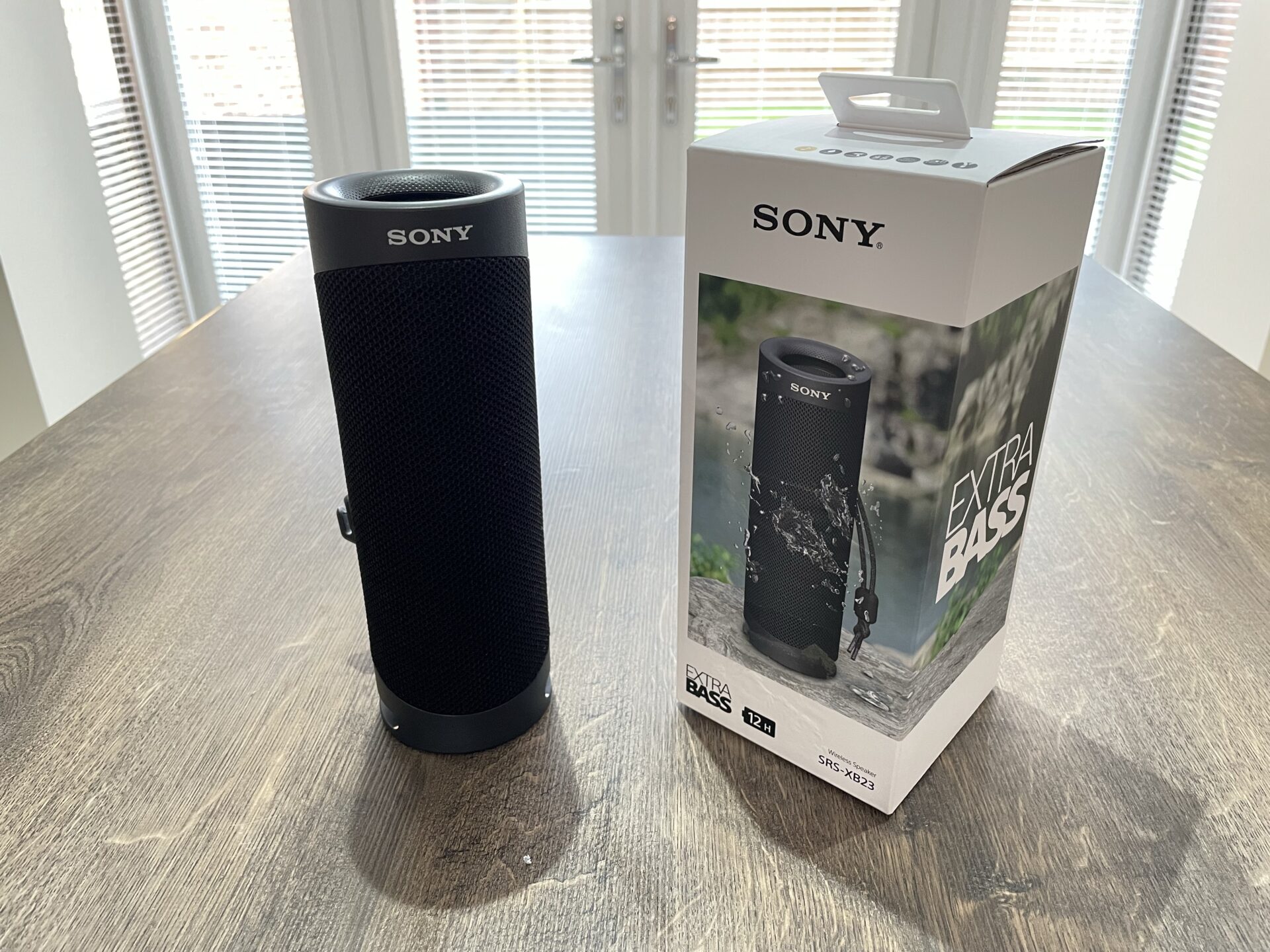 Around 2 years ago I decided to upgrade my home sound system and invested in a Sonos Soundbar and a pair of Sonos Play:1 speakers. The cost was somewhat eye watering however with the speakers in use every day, 2 years on it feels like it was a great investment in some top end sound equipment.

At the time what I didn’t really appreciate was that being Wi-Fi based, should I wish to take music out and about with me this Sonos system wouldn’t be ideal. And that’s exactly what happened recently. My daughter turned 3 years old and the hall I had hired for her party didn’t have any sound equipment. With the Sonos unable to be relocated I took a trip down to Curry’s on the hunt for a new Bluetooth speaker which would not only serve the need for a kids party but become part of my technology setup for picnics, pool and beach holidays and working out in my home garage gym.

After a huge amount of time testing everything that the store had to offer under £100 I eventually settled for the Sony SRS-XB23.

What’s in the box?

Unboxing the Sony speaker, there was very little to be discovered beyond the speaker itself. The box contents were simply the speaker, a USB charging cable and some basic operating instructions.

One of the reasons I decided to buy the SRS-XB23 was because of its sleek design. With the speaker falling within the sub-£100 mark many of its nearest price point competitors were either overly chunky or could only be mounted horizontally which based on cylindrical designs risks instability.

With the SRS-XB23 however the unit can be stood vertically and although a speaker is located on the base end of the unit, the base speaker is mounted away from the end behind a plastic void, keeping the speaker cone away from the surface and preventing any muffling of sound.

Another great part of the units design is that is the same diameter as a drinks can, allowing it to easily fit within drinks holders – perfect for camping and sun loungers!

The SRS-XB23 comes in a range of colours offering you the ability to personalise the speaker to your surroundings and individual taste. I’m fairly classic in my design choices and so I opted for the black finish to blend in seamlessly among my other household devices.

The SRS-XB23 presents 8 buttons along the length of the rear edge:

Some of the key features here include stamina mode which effectively drops the bass and substantially increases the battery life of the speaker, party mode which allows the speaker to pair with up to 100 SRS-XB23 devices for simultaneous playback (this feature would be ideal if a speaker was located in several rooms and you want the music played consistently across all rooms), and stereo pair which allows for 2 units to be paired in stereo.

With 12 hours of battery life available under stamina mode or 10 hours with extra bass mode active you’ll have plenty of juice to keep the music/your favourite podcast playing.

Most of the other features on the SRS-XB23 are fairly self explanatory, including a battery status button which when pressed, vocalises the percentage of battery remaining.

Although I am unlikely to use the feature, the Bluetooth connection between your SRS-XB23 allows you to answer phone calls and talk directly into the speaker.

The SRS-XB23 also features a small strap which is very handy as it allows you to tie the speaker to your bag, onto a parasol or anywhere else off the floor.

Now let’s be honest, when you spend a mere £75 on a speaker which contains speaker cones that are around 5 inches in diameter you cannot expect to be blown away by the performance. These speakers aren’t designed to compete with studio monitor speakers or higher end Bluetooth speakers which are substantially bigger and in the £300+ price range.

They are designed to produce a high quality sound output that is reflective of the price point, and that’s exactly what the SRS-XB23 achieves via its 2x 4W speakers.

For a small speaker the sound quality is very good. Turning the volume on the unit right up there was no noticeable loss of sound quality, no distortion and no speaker popping. Given the size of the speaker cones the bass response was also very good for its size producing clear and crisp bottom notes.

Downloading the Sony music app to iPhone/Android, you are able to connect to the SRS-XB23 and adjust the bass, mid and treble ranges. I found this feature particularly useful as although marketed as “extra bass”, there is really only so much bass possible from such a small speaker cone. Heading into the Sony Music Center app and increasing the bass setting however there was a noticeable increase in bass response beyond the default factory setting.

When comparing the SRS-XB23 to similar devices in store, other devices did achieve greater overall volume due to higher output (Watts) however for a speaker that will be used in public places 99% of the time, sound quality was a much bigger factor here over sound volume as other speakers lacked clarity in the higher volume ranges.

The speaker was used for a 3 year olds birthday party in a large hall (the size of a tennis court) that had high ceilings and with the volume at around 75% it was perfectly adequate to keep the kids entertained and not be drowned out by their excitable screams.

When considering the purchase here one of the tipping points that sold it to me was the IP67. What this means is that the SRS-XB23 is waterproof, fully submerged for 30 minutes, sand, and dust proof due to it being a sealed unit and having no fabric based materials, and shockproof being able to withstand a drop from 1.2m.

For a dad with a 3 year old and 6 month old this is absolutely perfect given that the speaker is likely to be picked up and smothered with sticky, food covered fingers, knocked over into a drink/puddle/swimming pool etc. This allows me to fearlessly take the speaker to the beach, the pool, out in the rain etc and if an accident does happy I can simply run it under a tap to clean it up or leave it to dry. Perfect!

For those without kids the speakers waterproof design also means it can be hung in the shower making it the perfect accompaniment to your morning routine.

My overall assessment of the SRS-XB23 is that it is a well made, well designed speaker that is hugely adaptable and able to stand up to some punishment. With the ability to create a stereo pair, link the device to multiple units for simultaneous playback and have no worries about the unit getting wet it really is the perfect portable speaker for most people who don’t want to spend a small fortune that produces a high quality sound output.