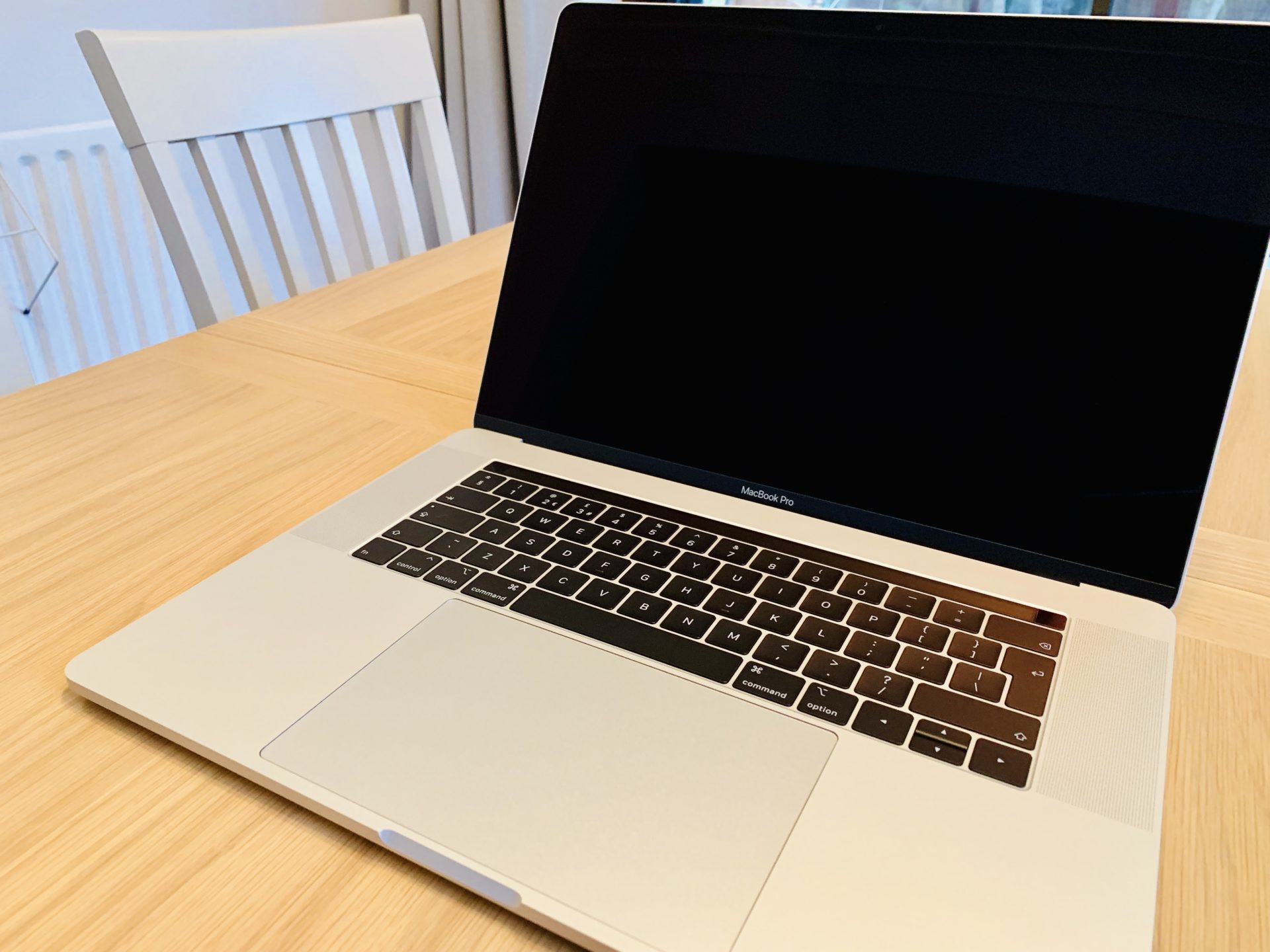 It’s been quite the month at Life of Man headquarters when it comes to embracing new technology and upgrading old kit. At the start of April there was an embrace of voice assistants with the purchase of a Google Home Mini and then only 2 weeks ago I finally upgraded to the iPhone XS following my iPhone 6s packing up. Well they do say that things tend to come in three’s and so to create the technology hat-trick, this week I also decided to upgrade my old laptop for Apple’s flagship machine, the MacBook Pro.

Having been a user of Windows based computers all of my life the temptation to continue with what I have always known was quite strong. I have used Windows based computers since I was 10 years old, use it in my everyday life at work and it remains the most used operating system globally. In recent years however I have grown increasingly fond of Apple based products especially having owned an iPhone for many years now along with an iPad mini. I haven’t ever owned an Apple computer however so with my HP PC packing up recently I felt it was finally time to fully adopt an Apple way of life and purchase the MacBook Pro.

Within the beautifully designed casing the MacBook Pro is filled with the latest technology. It runs on a 2.6GHz 6-core 8th-generation Intel Core i7 processor coupled with 16GB 2400MHz DDR4 RAM and Radeon Pro 560X with 4GB of GDDR5 graphics memory. This offers superb performance for even the most demanding of applications.

Although limited to the basic specification through major retailers, by shopping direct with Apple you are able to increase the specification to a 2.9GHz 6-core 8th-generation Intel Core i9 processor and even Turbo Boost this up to 4.8GHz.

Paying for either of these 2 upgrades is going to bring you a serious amount of additional performance which let’s face it, for the every day Mac user will be a lot of extra money for performance which is simply overkill. They’re only really needed for the most demanding of Mac users/developers.

Out of the box the 15 inch MacBook Pro offers 512GB of integrated SSD storage which if like me you also use a combination of iCloud and Google Drive storage is going to be plenty. If you aren’t wishing to host your documents in the cloud however Apple offers you the opportunity to upgrade this storage to either 1TB, 2TB or 4TB. The latter option will set you back an eye watering £2,520 however so unless you have more money than sense and desperately need an integrated storage solution I would recommend buying an external hard drive for a fraction of the price!

The majority of Apple’s products now integrate their impressive Retina Display and the MacBook Pro is as you would expect, no exception to this.

The 15.4-inch display is backlit with LEDs and IPS technology offering both a high resolution image with low power consumption and a lack of heat generation. The screen runs at 2880×1800 native resolution with 220 pixels per inch and millions of colours along with 500 nits brightness providing a full HD experience.

What you get from the display are incredibly sharp images – your photography skills permitting(!) – coupled with vibrant images.

Apple has also integrated their True Tone technology. The is a smart feature which adapts the screen to different environments giving you a consistent experience. It’s a great way of avoiding the screen being too bright one minute and too dull the next however in my early experience it can affect your enjoyment of the device if you are wanting all your colours to constantly be at their most vibrant.

One of the biggest innovations with the MacBook Pro is the new ”Touch Bar”. This sits along the top of the keyboard in place of where the F1-F12 keys would traditionally be located.

The Touch Bar is basically a touch screen display which is the full width of the keyboard. What’s clever about it however is that what is displays adapts to your current application with the aim of speeding up tasks.

For example, if you are using Safari your Touch Bar might display your active tabs, favourite sites, forward and back button, a search bar or home button.

It is in fact configurable so you can choose what you want it to display. There are admittedly some features here which you would simply never use like predictive text whilst typing but for the most part being able to do tasks from the Touch Bar with the need for the Trackpad is super handy.

In addition to the Touch Bar screen, on the far right of it is an integrated Touch ID sensor. This is the same technology that is used across the latest iPhones which allow you to use your fingerprint to sign into the MacBook, login to websites and undertake other security tasks linked to your keychain which is really handy.

The MacBook Pro has fully embraced the latest technology which although arguably the right thing to do for the latest device will leave many people angry at the lack of backwards capability. Apple have removed all ‘standard’ ports from the edges of the MacBook and replaced them with just 4x Thunderbolt 3 (USB-C) ports and 1x 3.5mm headphone jack.

The new USB-3 ports can all be used for:

So this means you no longer have a standard USB input, SD card input, HDMI input or any other your other favourite connections. Apple have of course thought about this and so you are able to buy adaptors for all of the major input components. These do of course come at a price so if you require old connectivity be prepared to spend a little more than the base price to get everything working as you need it to.

The keyboard on the MacBook Pro is fully lit with controllable brightness settings. This affects both the 65 keys and also the Touch Bar which is also used to control the backlighting.

The “Force Touch” trackpad has been included on the MacBook Pro to allow for both precise control of the cursor and pressure-sensing capabilities for advanced use. This enables what Apple class as “Force” clicks, accelerators, pressure-sensitive drawing and Multi-Touch gestures.

The MacBook Pro has the standard connections available with Wi-Fi and Bluetooth with the latter allowing for iPhone features such as AirDrop for other nearby Apple devices.

The MacBook Pro contains a front-facing HD camera capable of producing 720p. This is an excellent level of quality for undertaking either video conferencing, recording for YouTube or jumping onto FaceTime with family and friends.

Via the Thunderbolt 3 ports the MacBook Pro allows you to not only have the 15 inch display output in full resolution but run up to four additional displays via the following configurations:

Other video output capabilities include:

As previously mentioned the MacBook Pro contains a 3.5mm headphone jack which will be a welcome addition to the majority of owners who value high quality audio and have their own headphones. In addition there are 3 microphones present to capture audio input.

The audio output for a portable device is very strong offering stereo speakers with a high dynamic range. With music on there is of course the traditional to be expected tinniness associated with small speakers at the top end however the MacBook Pro can produce a level of bass which personally I found quite unexpected.

The 15 inch MacBook Pro comes in with the following dimensions and weight which may be major consideration for you if you are using the machine for commuting and moving around a lot. The 13 inch model may be a better option if you are looking for something smaller and lighter.

The MacBook Pro is contained within the standard white Apple packaging which offers their now famous super sleek design.

The packaging is so tight that it can take a bit of work to get the lid off however once inside you are immediately met by the MacBook Pro.

There is a really useful tab on the edge of the MacBook Pro which will then allow you to lift the machine out of the box to reveal the contents underneath.

Under the MacBook Pro you will find a 2m long USB-C charging cable and an 87W USB-C Power Adapter.

Additionally you will find a quick start leaflet and the usual inclusion within an Apple product of 2 Apple stickers.

How much does the 2018 MacBook Pro cost?

The UK retail price of the 15 inch MacBook Pro varies depending on the specification that you go for however the one pictured here which I purchased set me back £2,699 at the time as I upgraded my choice to a 512gb hard drive.

The MacBook Pro is the flagship product from Apple when it comes to laptops and owning one definitely feels like you have something special in your hands. From the design elements to the performance it offers everything that you could want from a machine however it is not without its limitations. The lack of ports is a real problem for me personally and the astronomical price when compared to a Windows OS based machine makes it difficult to part with the money.

If like me you are a fan of design, want to experience the benefits of cross device applications if you own more than one Apple product and need a machine that is not going to crash on you every 5 minutes it’s a great thing to own. I’m only a week into ownership however I absolutely love it and am already wondering how I’ve ever lived without a Mac in my life. 9/10, superb!