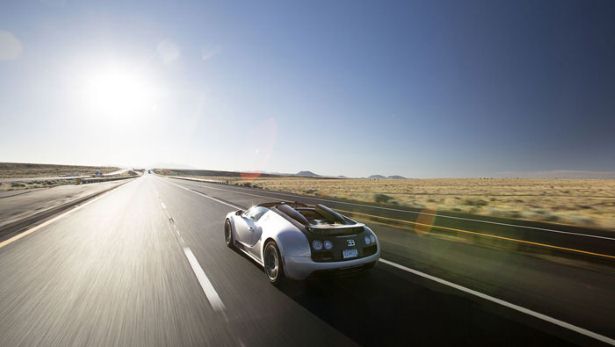 There aren’t many cars around that really make me stop what I’m doing and spend time thinking about where I would park it, how I would clean it, how it would look on my mansion driveway but the Veyron Grand Sport Vitesse is definitely one of them!

Earlier today I was browsing the Top Gear website and came across their feature of taking the Veyron across Route 66 (well worth a read so go check it out!).

Personally I think that Route 66 is completely the wrong environment for this machine as it doesn’t exactly fit with the history of the road or the car! (And how much petrol did they likely spend on that trip?) That said the shots that they produced on their trip are fantastic and yes, they did make me have a bit of a “need to win the lottery moment”.

To quote the Top Gear website, this sums things up pretty damn well…

I’ve always, like most guys, had dreams of owning a supercar one day. So far I’ve managed to own a Honda Civic Type-R and a Seat Ibiza FR so I’m not quite at supercar level yet! The reality of owning one of these machines of course is that unless I come into a huge sum of cash it’s not going to happen anytime in my lifetime, especially not from my current career in digital marketing!

Everyone needs dreams and ambitions and as one of my most materialistic goals, owning one of these is certainly right at the top of my list.

Photos all by Justin Leighton, taken from TopGear.com.