How to Lay Venezia Oak Laminate Flooring from Wickes 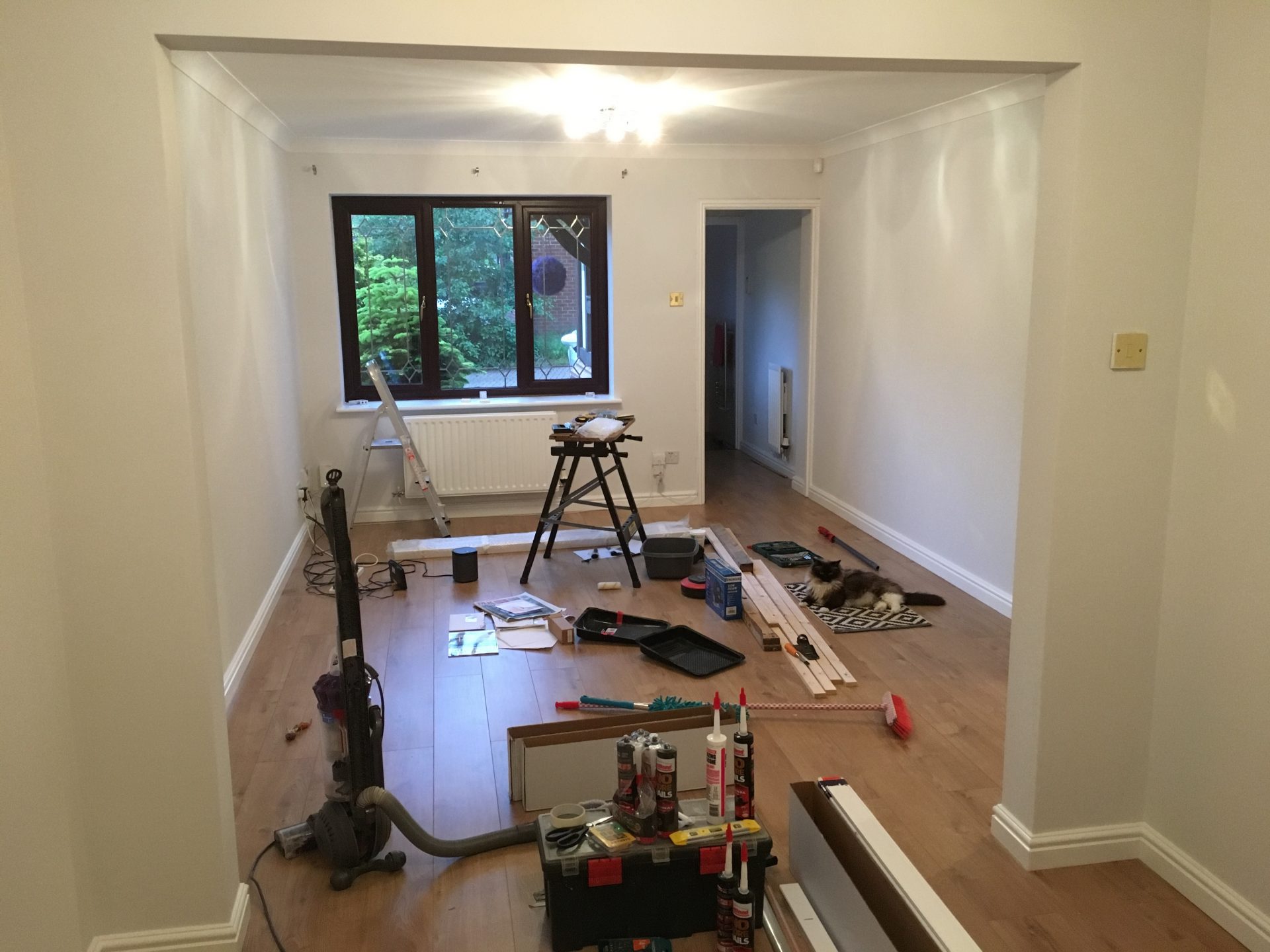 I’ve been living in my house for a good 3 years now and during that time there has been a constant conversation taking place – what on earth were the previous occupants thinking laying a bright orange floor throughout the lounge and dining room!? In fact it stretched beyond that, into a lobby by the stairs and also the front door lobby, a real eye sore!

After far too long discussing the scuffed up orange floor, enough was enough, it had to go!

Now at this point I had a long discussion with myself trying to decide how best to approach the job. Should I pay someone hundreds of pounds to do it for me? Should I tackle it myself? Should I use beading around the edges or rip off the skirting boards and put it underneath?

Being a massive perfectionist I realised no one would do as good a job as me and so I decided to take it on myself, all 34m2 of it! Not only that but as I’ve been doing a complete refurb of my downstairs with the ceilings being reskimmed, walls being sanded back and repainted and all doors coming off I figured I’d do things properly by taking off all the skirting boards too. This was going to be a big job.

Things you will need:

This in itself was a right pain. With 2 sofas, lounge and dining room furniture to be relocated that takes up a huge amount of space. The solution? Pile it up to the rafters in the conservatory!

For this I shopped around a lot considering the usual home improvement stores like Homebase and B&Q. Eventually however I settled on 22 packs of Venezia Oak flooring from Wickes, loaded up the trolley and filled the car – who needs a dropped sports suspension when you have over 20 packs of laminate flooring.

With the room empty it was time to start pulling things up. I crow-barred the skirting boards off, trying not to rip half the walls off with them and then made a start on taking up the flooring.

With underlay, prices can vary a lot. You can pick up the cheap white foam that offers little in the way of quality or functionality or as I did, invest a little more. As I was laying the laminate down on over 30m2 of concrete substrate on my ground floor I wanted extra protection from any damp that may come up through the concrete, something that would provide insulation to save on energy bills and something which would reduce noise from the floor.

I settled for a couple of packs of underlay from Wickes which were at the top end of the range.

The underlay was laid and all joints taped together with insulating tape so I was ready to get started with the boards.

With the flooring unloaded into the house the next major job was the setting out. That being to ensure I didn’t end up with a long 1cm slither needing to be cut along any edges, and that where I was going to be running the floor through doorways it transitioned perfectly. To do this I measured up the boards, measured the dimensions of the room and drew myself a floor plan with all of the boards drawn on so I knew exactly how things would sit.

With any laminate flooring they typically come in packs of 5-7 boards. This means you may only have 7 different board patterns to work with. To avoid this I opened 2 or 3 packs to see what patterns were in the set, identifying 10 unique styles.

This was useful because as I was then laying the flooring I could ensure no 2 patterns were laid next to/near each other – I wanted to avoid having a patch of the floor where 4 printed boards would be laid next to each.

When I then laid the flooring I always kept the next 2 rows set out in parallel to ensure the patterns appeared different.

With the Wickes laminate it was snap together boards so each board could join into the next one simply by pushing it in at a 45 degree angle. This meant I had to start at the furthest corner of the room and work towards the opposite corner to allow the click together system to work.

To cut the boards to size along the walls and on each end of the room I bought myself a budget Energiser jigsaw from Screwfix for £20 along with some extra blades – not exactly high quality! I then borrowed a bench, some tools and 2 g-clamps from my old man to get the job done. Additionally I bought a laminate fitting set containing spacers, a knocking black and pull bar.

Cutting the boards with the jigsaw did save a huge amount of time however it had a real tendency to splinter the laminate with the top layer of plastic breaking off, separating from the board underneath.

As I was laying directly under skirting boards these messy edges really didn’t bother me but it’s worth bearing in mind if you’re considering doing the same – it won’t give you a straight edge. Where a straight edge was required I cut the boards by hand using a laminate saw which gave a perfect finish.

I packed the spacers around the edges of the floor to allow for expansion and then used the pull bar to ensure the joints were tight.

From here it was then simply a case of moving across the room laying each board and cutting them to the right size.

With the floor I decided to run it through to my front door lobby and also sideways into my stair lobby and understairs cupboard. This proved particularly difficult trying to get snap together flooring through door stops…

4hrs to get one piece of laminate laid around a door frame, something tells me I should have paid someone to do this work! #diy #maleblogger

However some time and a lot of perseverance later I achieved a good finish.

To get the skirtings back on I avoided hammering any nails into them and simply settled for a generous helping of No More Nails on the backs which I then held firmly in place with wooden braces until the adhesive went off.

Something that you should note if laying under skirting boards is that after you’ve laid your floor your skirting boards will be sitting about 2 inches higher on the walls – make sure any door frames have been cut to allow the skirting to be relocated that little bit higher.

With everything laid the hard work was done! To achieve that smooth to the wall look I picked myself up some white builders caulk from Homebase and using a caulking gun ran a bead around the top edge of all skirting boards and also the corner joints.

As this stuff is silicone based, it’s messy. It literally sticks to everything. To smooth things down I’ve found smoothing tools to create too much mess so instead I opted for a simple trick – using a wet finger, simply drag it along the beaded edges with gentle pressure. The water avoids the silicone sticking to your finger and you have complete control over where to work it into.

Now this is a bit of an optional step however there are far too many times where spiders, ants and other bugs emerge from underneath skirting boards. To keep them out and also add an additional layer of making the room air tight I ran a clear silicone bead along all of the bottom edges, again using a wet finger to smooth it out. With it being silicone it’s flexible so as the floor moves with expansion from heat/moisture the silicone joint can freely move with it whist maintaining the seal. My only word of warning – this stuff stinks!

As the silicone is so messy I opted not to take any photos of this stage to avoid getting it all over my camera/phone!

With the flooring laid, I immediately vacuumed it and gave it a wash down to remove all of the dust and debris. Working full time and with busy weekend plans I ended up laying the flooring in the evenings after work which meant it took quite a while, especially with electric saws and late night noise.

I also laid the floor as part of wider renovations, replacing the ceiling, painting the walls, smashing out an archway and completely refurbishing the skirting boards. This meant the project took over 2 months to complete – I know, ridiculous!

The finished product however is something that I am extremely proud of:

This is even more apparent when viewed with a before and after shot.

The Venezia Oak flooring from Wickes can be bought here, currently for £14.79 per pack (£9.99 per sq/m). The overall quality is good and the flooring feels solid and certainly not like it’s going to come apart with wear and tear.

I’m really happy with the finished product and really happy that I tackled this DIY job myself – a great sense of achievement!

5 Modern Updates Your Home Needs For Next Summer

Reducing The Stress Of Moving House