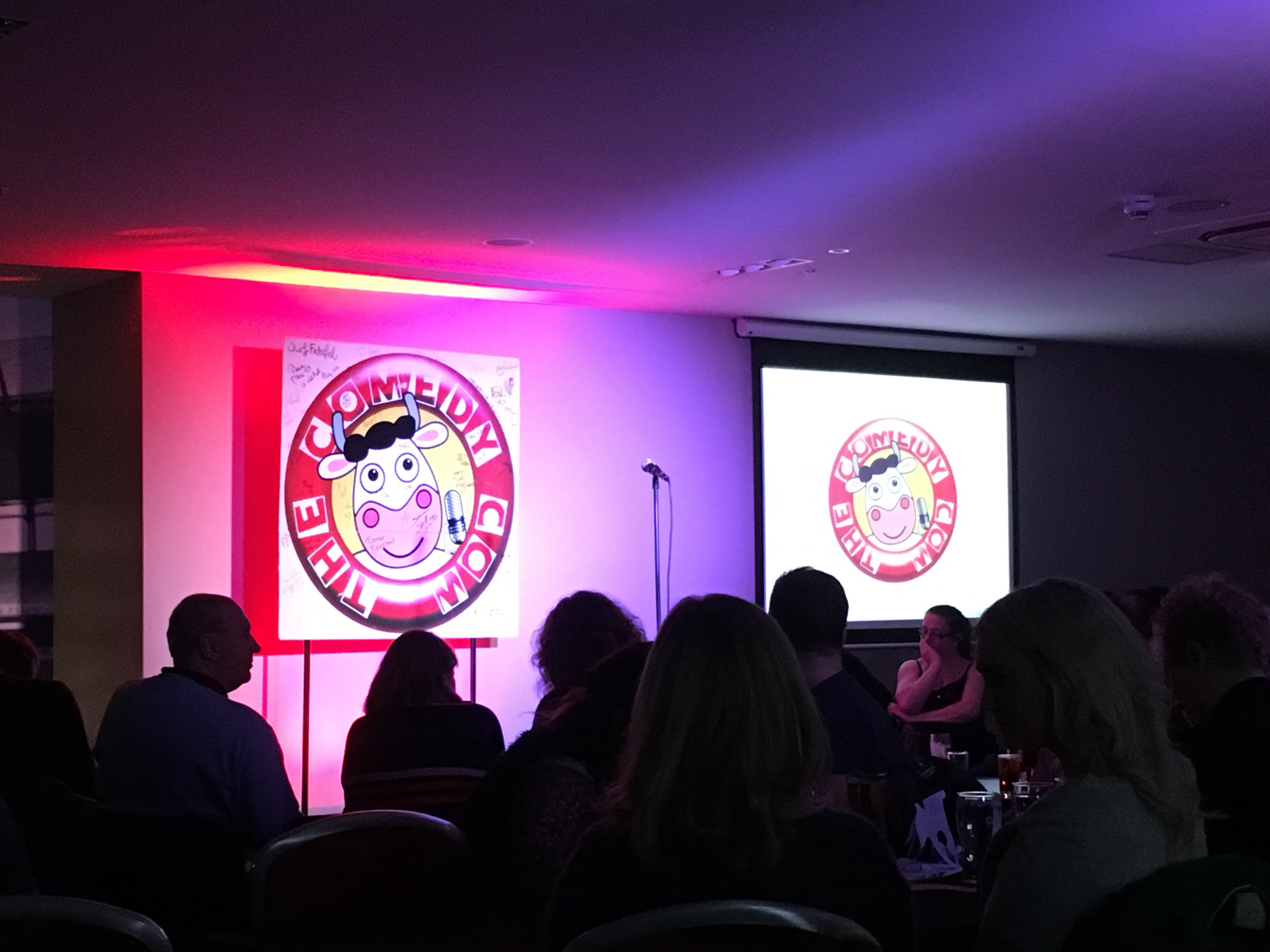 Milton Keynes isn’t a destination you may think of when it comes to comedy however over the past couple of years the MK comedy scene has been rapidly growing with numerous TV celebs making appearances around the city. Personally I absolutely love a good comedy night out with one of my favourite evenings being a few years ago at the Comedy Store in London seeing Ian Bishop perform.

Back in 2014 I saw Seann Walsh and Roman Ranganathan perform at the Milton Keynes International Festival and since then there have been a number of big comedy acts coming to city including the likes of Jimmy Carr and Bill Bailey. These are of course the high ticket price acts and they tend to perform at the big venues in the city such as Milton Keynes Theatre.

Alongside the professional acts there has been an emergence of various comedy venues and regular comedy nights in Milton Keynes – some of them hosting some great up and coming local acts along with mid-weight touring comedians.

The Comedy Cow is run by 2 friends, Steve and Ben, operating out of South Wales and numerous venues in MK including Red Dot Bar Stadium:MK, York House Stony Stratford and Bletchley Rugby Club.

I’ve been to the Comedy Cow’s events on several occasions both at The Crown in Stony Stratford (original venue) and more recently at Red Dot Bar at Stadium:MK. Every time the evenings are very professionally run and offer some fantastic local and national up and coming acts. Many of the acts performing are on tour or tend to use the gigs as a rehearsal for the Edinburgh Fringe so you’re almost certainly guaranteed a great night out.

The Comedy Cow describe their events on the website as follows:

“The Comedy Cow is run primarily by two friends, both of whom are qualified secondary school teachers, along with a lot of support from friends and family. The club is run as a hobby, and that is how prices are kept affordable and accessible to all as there are no big corporates behind the scenes. We set the club up after looking for this sort of comedy night to go out to ourselves!”

The Milton Keynes Comedy Festival is run by the guys from the Comedy Cow and it takes place every year at Westbury Arts Centre in Shenley Wood across 3 days (Friday night, Saturday and Sunday).

I’ve not been to the festival previously however it certainly sounds like a great couple of days based on word of mouth.

The Milton Keynes Comedy Festival is described by the organisers as follows:

“Milton Keynes Comedy Festival will feature over 30 different shows from a wide variety of acts! There will be Edinburgh Preview Shows from acts just 1 month before heading up for the Fringe. Friday evening will see us kick-start the festival with our traditional comedy show line-up featuring four of the best comedians on the UK comedy circuit. Then on Saturday and Sunday there will be four rooms of comedy, including a Yurt, we’re sure you’ll find plenty of variety to tickle your comedy tastebuds all day and night! Food and drink will be reasonably priced and not your typical festival prices! There will be a licensed bar, and a BBQ to keep you fed and watered throughout the weekend!”

The Comedy Club in Milton Keynes is hosted at Wonderworld in Xscape – the Milton Keynes focus forms part of a much larger organisation that has been producing comedy nights for the best part of 20 years.

These guys have been around as a group for quite some time and know a thing or two about putting on a great comedy night. They describe their events as follows:

“The night comprises with 3 of the best professional  comedians from the prestigious UK comedy circuit, in fact the very circuit that launched today’s stars such as Michael McIntyre, Jimmy Carr, Al Murray, Jason Manford and so many more, so you know you’re in for a top night out! With each show giving  you the chance win great prizes, as you become the comedian with our famously funny Joke Competition.”

The Stables is a well renowned venue in Milton Keynes offering all sorts of music and entertainment.

The venue has played hosts to some incredible acts over the years including Amy Winehouse and Beverley Knight. More recently however the Stables have been diversifying their events away from a largely musical offering, picking up some top-class comedy acts.

The Stables has a huge amount of big name comedy lined up for 2017 including Lee Nelson, Ruby Wax, Jo Brand, Seann Walsh, Chris Ramsay, Andy Parsons and Ed Byrne – the list goes on and on!

The Milton Keynes Theatre needs no introduction as it forms a focus point to you guessed it, the theatre district in the heart of MK.

2017 has already started to build a great list of top flight acts including Omid Djalili, Jimmy Carr and Ross Noble.

So what are you waiting for? Pull out your wallet and find a different way to spend your Friday or Saturday night. Ticket prices here range from around £8 to £50 if you head to the larger venues.

Have I missed a decent venue or comedy night in MK? Let me know in the comments.