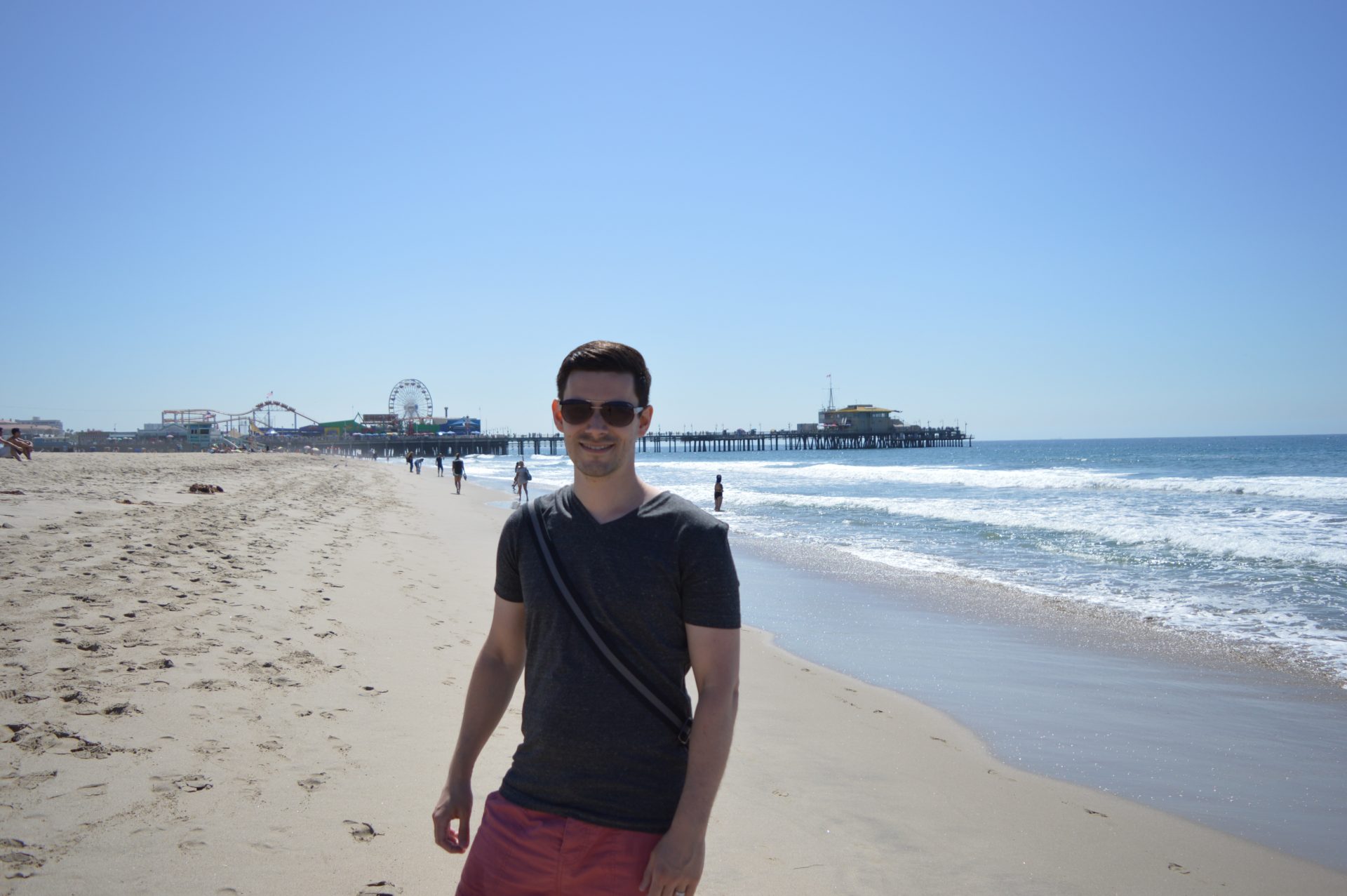 Santa Monica was the 2nd destination of my 21 day honeymoon in America and the first of several along the California coast. Following our 2 days in Washington the 6 hour internal flight touched down at LAX and we made our way across the city to the 5* Fairmont Miramar Hotel and Bungalows.

We arrived into Santa Monica quite early evening and checked in. Within 20 minutes we received a knock on the door and were met with a bottle of bubbly and chocolate strawberries to celebrate our honeymoon!

After a quick shower we headed straight down for dinner at the highly recommended hotel restaurant, The Fig which was superb.

For our first day in Santa Monica we had planned to just relax a little and take things slowly after our incredibly busy time in Washington. Things didn’t quite turn out that way however as we ended up doing a lot of walking!

We kicked the morning off with a short walk from our hotel down to Santa Monica beach. The beach is stunning with golden sand stretching to the horizon, lifeguard stations like you see in the movies and some very expensive looking houses scattered along the beach front. What was most impressive to me was how deep the beach was – certainly no shortage of space if you want to catch some rays!

We then headed along the beach up to the pier. Like most piers it’s got shops and restaurants on it along with street performers, fishermen and a fairground! The views from the end of the pier back along the coast were great and certainly required a few minutes to appreciate it. Now I’ve been on quite a few piers in my time and there are definitely good ones and crap ones. Luckily this is one of the good ones. It’s in good condition, it’s clean and there’s plenty to do so a walk down it is definitely worth your time.

Leaving the pier behind us we headed a little further along the beach to the boardwalk. When you think of boardwalks and California, girls on roller skates, bicycles, bikinis and Katy Perry videos spring to mind – the Santa Monica boardwalk is basically all of those things!

Along the boardwalk there is a lot of fitness equipment readily available so of course we had to give it a go! I wasn’t too bad at the rings!

Energised from the “workout” we started to make our way along the coast to Venice. We debated whether to do this on foot or hire bikes and cycle the boardwalk however feeling like keeping things slow we opted for walking. This ended up being a bit of a regret as it was blisteringly hot and a lot further to walk than we expected!

On the route to Venice there was loads to take in including the infamous Muscle Beach where Arnie used to train. I’m not sure we would fit in here however! There was also a lot of street art.

Upon arrival into Venice it got a bit crazy. There are street performers and quirky shops everywhere selling everything from t-shirts and hats to homemade goods! Tired from this walk we headed to Lemonade just up the road for lunch.

We jumped on a Big Blue Bus back to Santa Monica and once in town, wandered to the hotel via the shops. The day ended up involving a huge amount of walking so being pretty exhausted we settled for chilling out for the evening with a film and room service!

We kicked off our second day with a planned tour around Los Angeles with Surf City Tours which was a trip we had discovered and booked prior to leaving the UK.  The trip took around 6 hours and showed us all the hotspots including Beverly Hills and Hollywood, perfect for touristing!

What was great was that we were picked up on the doorstep of the Fairmont hotel. The bus seated around 10 people so it was quite fun as it was small so we got to know the other guys on the trip a little as the day went on.

The day kicked off in Bel Air with our guide, Mike, showing us celebrity houses. We then made our way up to Beverly Hills and the Old Farmers Market where we stopped for lunch.

The tour was great as it showed us all the best bits without the hassle of us having to discover them ourselves in a car! On our return to Santa Monica we jumped off the bus at the top of the shopping district and headed to an Italian restaurant for dinner.

We had originally planned for Santa Monica to be a bit of a pool and beach relaxation part of the holiday however it certainly didn’t turn out this way as we were so busy on each of the days we stayed there. That said it was a beautiful place and the tourist side to it had plenty to see and experience. I think in the years to come we’ll head back to Santa Monica but maybe spend a week there catching some rays and not worrying about running around at 100mph!

For the next leg of our honeymoon we picked up a convertible Mustang and drove the Pacific Coast Highway to San Francisco!